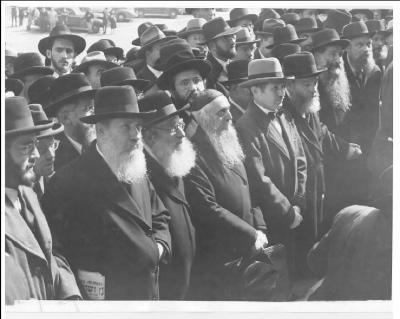 Photo of Rabbis Listening to Rabbi Eliezer Silver Read to Vice President of the United States Wallace the Petition Beseeching the United States to Deliver European Jews From Extermination by the Nazis. October 6, 1943

WASHINGTON, D.C. – Some of the 300 Orthodox Jewish Rabbis as they stood on the steps of the Capital when they solemnly Heard Rabbi Eliezer Silver, of Cincinnati, Ohio, read to Vice-President Wallance the petition to the United States to assume the role of a modern David and deliver the European Jews from the extermination by the modern Philistines.  On each of their face is plainly shown their cognizance of the plight of their European Bretheren."

Two of the leaders of the march read aloud the group's petition to the president, in Hebrew and English. "Children, infants, and elderly men and women, are crying to us, 'Help!'," they read. "Millions have already fallen dead, sentenced to fire and sword, and tens of thousands have died of starvation ... And we, how can we stand up to pray on the holy day of Yom Kippur, knowing that we haven't fulfilled our responsibility? So we have come, brokenhearted, on the eve of our holiest day, to ask you, our honorable President Franklin Roosevelt ... to form a special agency to rescue the remainder of the Jewish nation in Europe."